Alexander "Sandy" Stoddart, who has been the Queen's Sculptor in Ordinary for Scotland since 2008,  accepted a commission to produce a bronze statue commemorating “Old Ginger”, the founding father of the Dandie Dinmont Terrier.

"Old Ginger" was born at The Haining, Selkirk in the Scottish Borders on June 4th 1842 and every Dandie Dinmont on earth today can trace their breeding back through their male line to "Old Ginger".

Remarkably, the actual kennels that "Old Ginger" was born in still exist at The Haining, a grade 1 listed Palladian mansion. They were discovered only recently, having previously been incorrectly identified as a "menagerie".
Research indicates that these are the only surviving kennels for any breed that can lay claim to the birthplace of a breed founder. The life sized statue to honour his significance to the breed stands in the kennel yard adjacent to the kennels and was  unveiled on Old Ginger’s 175th birthday, June 4, 2017.

The Haining also hosts a unique Discovery Centre which educates the visiting public, tourists and dog lovers about the Dandie Dinmont Terrier.  A computer database also allows visitors to research their own Dandie's pedigree. 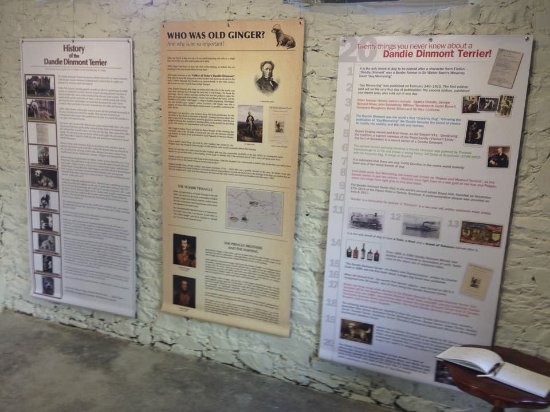